Believe It or Not, It’s Not All Doom and Gloom Around Husker Basketball

Except for a stunning three-game run of wins at the end, Nebraska’s basketball season was forgettable.
What else is new, right?

Well, this: While previous offseasons of the Fred Hoiberg era have been marked by massive roster turnover, this one seems it will be marked by changes to the coaching staff and recruiting philosophy.

And that is a good thing.

While top-tier teams were focused on NCAA tournament play in late March, Nebraska was jettisoning coaches. The program mutually parted ways with assistant coach and chief recruiter Matt Abdelmassih. Then Nebraska announced Doc Sadler, special assistant to the head coach, would not be a part of the staff going forward and that the position was being eliminated.

The most significant change is the departure of Abdelmassih, who single-handedly oversaw Nebraska’s recruiting operation the last three seasons and did very little on-court coaching. Hoiberg has never had a season as a college coach without Abdelmassih, who hung his hat on the recruitment of transfers.

With Abdelmassih’s departure, priority No. 1 for Hoiberg became keeping his 2022 recruiting class intact.

With promising 6-foot-6 freshman guard Denim Dawson already on campus as an early enrollee, that put the focus on retaining 6-11 JUCO big man Blaise Keita, 6-3 New Jersey sharpshooter Jamarques Lawrence and 6-6 Sierra Canyon (California) guard Ramel Lloyd.
Lawrence did not waiver on his commitment, but it was reasonable to worry about Keita and Lloyd, who were directly recruited by Abdelmassih. Both, however, reaffirmed their commitments after visits by Hoiberg.

In late April Hoiberg got Juwan Gary out of the portal from Alabama. The 6-6 forward, a former four-star prospect, started 16 games for the Tide last season and averaged 6.5 points and 3.4 rebounds in 15.6 minutes.

All four of these newcomers are big gets for Hoiberg – as is Dawson. They solidify positions of need and alleviate fears that Abdelmassih’s loss might also lead to attrition of an excellent class of recruits.

Remember, these are the type of players who have other options, but they believed in Hoiberg’s vision enough to stay committed. That is a good sign.

Part of what they see is how the roster stacks up next season. Sure they see opportunity. How could they not with Nebraska winning only 10 games last season? But, dare I say, there have been some good things happening roster-wise lately.

The Huskers added a piece out of the portal in North Dakota State transfer and Lincoln East product Sam Griesel.

The Lincoln native was a four-year starter at NDSU and averaged 14.3 points, 6.6 rebounds and 3.4 assists last season. At 6-6, Griesel is being brought in to run the point, which he had done for the past two seasons in Fargo. Whether he can do that in the Big Ten remains to be seen, but Griesel is seasoned enough and good enough to help somewhere.

Also, 6-9 forward Derrick Walker announced he is returning for a sixth year of college basketball. Walker was a mainstay for the Huskers this past season and showed he has some offense to go with his defense. What’s more, with the arrival of Keita, Walker can move to his natural position at the 4. That’s two full-grown men down low. When was the last time Nebraska had that?

Another plus is the return of former four-star Wilhelm Breidenbach, who missed much of last season due to an injury. At 6-10, Breidenbach can shoot it and certainly will have a role next season.

As will C.J. Wilcher. The Xavier transfer proved his worth his first year as a Husker and good things can be expected from the sharpshooter next season.

The two players left on the roster with remaining eligibility who could return if they wanted are Trey McGowens and Lat Mayen.
Both were honored on Senior Night and both have played their fair share of basketball. Mayen likely has professional opportunities back home in Australia. My bet is that he is gone.

McGowens is more of a mystery. If he were to return, his vocal leadership and defensive intensity would play a big role for Nebraska next season. Getting him back would be huge for the Huskers.

On the attrition front, no departure is particularly surprising.

• Bryce McGowens officially declared for the NBA Draft. The AP Big Ten Newcomer of the Year broke multiple freshman school records. The goal was always the NBA for the five-star recruit, and his play down the stretch may have secured his spot as a first-rounder.

McGowens got bigger and better during his short stay. That’s good for him and good for Nebraska. On that front, Hoiberg and staff did not disappoint, which is a good thing for attracting future elites.

• Trevor Lakes could never stay healthy in his two years in Lincoln following his transfer from Division II Indianapolis.

• Keon Edwards was a touted recruit out of high school who reclassified to enroll at DePaul early but could never find footing there or as a Husker. Edwards was a starter for a time following Trey McGowens’ foot injury, but was never in an impactful role.

• There was talk that Eduardo Andre’s departure may have come before last season; however, he stuck around and showed solid improvement. The reserve big man likely saw the possible logjam of front court depth and decided to head elsewhere.

Now, for the most recent developments.

Arguably the most interesting addition has been the hiring of assistant coach Adam Howard, who comes from South Alabama where he served as associate head coach.

While he doesn’t have any prior ties to Hoiberg, he had direct connections with current assistants Nate Loenser and Armon Gates.
Howard has a defensive background and worked with post players in his prior coaching stops. Look for Nebraska to experiment with some matchup zone and pressure zone schemes.

It appears that Loenser, Gates and Howard all have specified coaching roles and all appear to be involved in recruiting. That’s a staff model followed by most teams in the country – all hands on deck, everybody involved in all aspects on and off the court.

Expect improvement from that standpoint.

Because this is Nebraska basketball, everything is not rosy. Replacing the 30 points per game lost by the departure of Bryce McGowens and Alonzo Verge won’t be easy. And even with those players, Nebraska won only four league games.

But unlike years past, there are promising pieces both returning and incoming. There is sure to be more roster news, but for now it appears Hoiberg is in better shape than most any outsider could imagine going into Year 4. 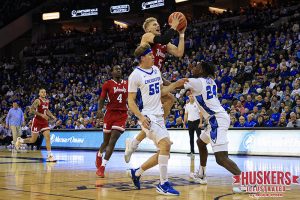 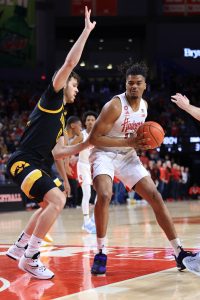 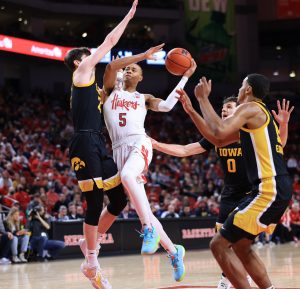