Top Recruit Has Started Every Game for Huskers in Second Year

The sophomore from Lincoln Southwest had an enticing scholarship offer from Minnesota to consider. The Gophers had established themselves as one of the Big Ten’s best softball programs, never finishing lower than third place since 2013.

Minnesota also had made six consecutive NCAA regional tournaments since 2013, including a Super Regional appearance in 2014. When the Gophers were pursing Squier, they finished 56-5 and won the Big Ten in 2017 before going 41-17 the following season and finishing second in conference play.

But before Minnesota made its first-ever appearance in the Women’s College World Series in 2019, Squier had already committed to play for the Huskers. Those are the kinds of options you have when you’re the No. 95-ranked player nationally in your signing class.

Though the program was in turmoil and the Huskers hadn’t – and still haven’t – been to an NCAA Regional since 2016, for Squier there was no place like home.

“For me it was more just Nebraska’s home for me,” Squier said before her senior season at Southwest. “I knew the coaching staff so well, and the vibe down there, I’m so used to it. Everyone is cheering for Nebraska.”

Squier’s recent reflections on the recruiting process reinforced her initial thoughts about becoming a Husker and being able to play home games in front of family and friends.

“At the time, my recruiting process was really hard,” Squier said. “Some kids love it and found it to be a lot of fun. I remember it being a super stressful period of time. I just had a gut feeling about Nebraska. I loved the people from the top down.

“On my unofficial visit, I got to meet with the current team, and that reminded me of what set Nebraska apart was the people. It also was huge for me to be able to have my family close. Whenever I get time I can go home and see them.”

Squier’s patience during her freshman season paid off this season with a starting role. At first it looked like Squier would be patrolling center field at Bowlin Stadium and the road venues in six other states.

That changed right before the start of the season when Squier was moved to left field. Nebraska coaches tweaked the lineup to put Sydney Gray back at third base after she’d fully recovered from the knee injury she suffered early in the 2021 season.

Brooke Andrews has started all but six games in center field after taking over for Gray at third base following her injury.

Not only is Squier firmly ensconced in left field, she’s one of only three Huskers who has started every game this season in the same position. Squier played in 28 games with 10 starts as a freshman, including seven in left field, two in right field and one as the designated player.

With Billie Andrews, the nation’s leading home run hitter at shortstop, and Gray at third, the left side of the NU defense is one of the Big Ten’s best. The trio has committed just nine errors through the first 28 games.

Squier said there weren’t many last-minute adjustments needed to make the position switch.

“In center field I was always able to play the hitters straight up,” Squier said. “In left I sometimes have to go way up and way toward the line on certain batters. With others I need to move over and fill the gap between center and left.”

Those three also rank among Nebraska’s top five hitters. Andrews leads the way with a .415 average, with Gray in third at .369 and Squier fifth at .329. All three also have been named a Big Ten Player of the Week during the non-conference portion of the season.

In her first weekend as a full-time starter, Squier was named the Co-Big Ten Player of the Week. At the UNI-Dome Classic in Cedar Falls, Iowa, Squier hit .500 in five games with one double, two home runs and five RBIs.

After battling through a slump in early March, Squier bounced back with another big weekend as the Huskers went 4-0 at the Rock Chalk Challenge in Lawrence, Kansas. Squier had two home runs and drove in three runs to lead Nebraska to a 9-3 win over South Dakota.

Entering conference play with a three-game series at Michigan, Squier is second on the team in runs scored (22), fourth in total bases (53) and fifth in RBIs (12) to go with her four doubles and four home runs.

The 35 at-bats she got as a freshman helped Squier realize what she needed to work on during the off-season to be better prepared for 2022.
“I just built confidence throughout the off-season working on things and spending the summer in the weight room on conditioning,” Squier said. “I’ve continued working on pitch selection early in the count and being aggressive, knowing my scouting chart so I know where I’ll be pitched.”

That higher level of self-awareness in the batter’s box is helping Squier become the better all-around player the Huskers need to regain their winning ways.

“Knowing where I’m getting out and how to adjust my approach to counter that has been a big area of improvement for me,” Squier said. “I was either taking too many strikes off early in the count or fouling pitches out.

“At this level with two strikes its tough, people can nip at the zone, get you to swing at a bad pitch. Now I’m driving those pitches I was fouling off. It’s awesome.” 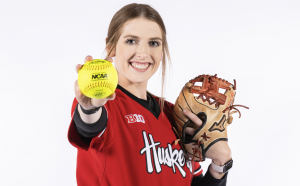