Primed For a Run

“I had planned on us going undefeated,” he said, tongue in cheek. “But I have been here long enough to know that it doesn’t always go the way you plan. People get injured, the COVID effect, guys who were freshmen last year are freshmen again, and pulling someone out of a redshirt is a tough deal. Because of injuries, we were short three to four starters in our first couple Big Ten duals. But all of our goals are still in front of us, and when healthy, this team is a tough matchup for anyone.”

That’s good news for the Huskers as their guys are healthy just in time for the Big Ten Wrestling Championships. This marks the first time since Nebraska joined the Big Ten in 2011 that the conference meet will be held in Nebraska. The event will be at Pinnacle Bank Arena March 5-6.

The Huskers have never won a Big Ten team wrestling title, finishing third last year behind Iowa and Penn State. Even if they don’t bring home a championship this year, hosting the event will have benefits.

It is a great opportunity for us to highlight our program and bring our fans and see the Big Ten tournament in our venue,” Manning said. “It will only be here once every 13 years. It is a great opportunity to highlight our sport and get local people more up to date on how great the sport of wrestling is and how great our guys are as competitors in our program.”

If  NU does make history and win the Big Ten, they will have to do it in the toughest wrestling conference in the nation. Penn State, Iowa and Michigan are ranked 1, 2 and 3 nationally. The Huskers have gotten as high as No. 8, and even though they lost to those top three teams during the season, they were not hugely outmatched.

We are just around the corner to be at the top of the Big Ten and are right there with Iowa and Penn State,” said NU’s 149-pound sophomore Ridge Lovett. “I have been three years in the program and we are making strides each year to get to the top. There are just some mental blocks that are holding us back. I don’t think our team knows how good they are yet. We are better than what we have shown. I totally expect to bring home a team trophy this year but it is going to take everybody wrestling to their full capabilities.” 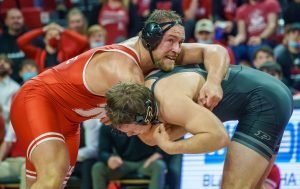 The senior class is led by Eric Schultz, Chad Red Jr., Taylor Venz and Christian Lance. Manning praises his seniors for leading the way, as they gain momentum going into the postseason.

“I think the senior class has come together to reach their individual and team goals,” Manning said. “Schultz is ‘Steady Eddie,’ CJ (Red) has been wrestling well, Venz has wrestled better than people are seeing, and Christian Lance has had a really good year. We will need all those guys to come through for us.”

All four seniors have a great shot to secure high placements in the Big Ten meet with Schultz and Red being capable of making it to the finals. Last year, Lance was fifth at 285, Red finished fourth at 141, Venz and Schultz were both second at 184 and 197, respectively.

With the help of this senior class, the thought is Nebraska should do just as well or better performing in front of a home crowd. Schultz feels the seniors’ approach to each match helps the underclassmen wrestle at their best.

“We’re all more lead-by-example guys,” he said. “We aren’t super talkative or demanding in a vocal way, but work hard and push our teammates that way. We show the younger guys the best path to succeed when they are older.”

Serrano and Reno have had a tough go of it this season. They are in their second year in the program, but as redshirts last year they didn’t get in any open tournaments to boost their development. They had to learn on the fly this year against Big Ten competition. Reno’s first four matches in the Big Ten were against four All-Americans.

“Reno has earned the respect of his teammates, because he fought hard every time. Against the No. 6 guy in the country at Penn State, he wrestled tight as heck,” Manning said. “That shows a lot of moxie and integrity.”

Serrano and Reno are not expected to go deep in the Big Ten meet, but one guy who could surprise is Wilson.

“From the start of the season till now, Bubba Wilson has improved a lot,” Schultz said. “He is one of the hardest workers I have met. He is internally motivated. Losses upset him but he doesn’t let them affect him that much. He accepts them, learns from them and gets back to work right away. He is always asking questions and learning.”

It’s not out of the question that a handful of Huskers might come out on top in their respective weight classes. Manning tells his wrestlers that just because the Big Ten Championships are in Lincoln, the path to becoming a champion is just as hard as it would be somewhere else, it is just a little more convenient.

“Ridge Lovett, Eric Schultz, Mickey Labriola, CJ Red and Peyton Robb all have the capability to win it,” Manning said. “People might sleep on Taylor Venz because he has Aaron Brooks from Penn State in his weight class. But he is capable of beating Brooks. Would it be the biggest upset I’ve ever seen? No, not at all.”

Lovett said wrestling at home is an advantage. “I am going to sleep in my bed and do the same things I do every day,” he said. “I live right across the street from Pinnacle Bank. It is in my time zone, in my town. I have upped my attack rate and added different attacks on my feet. I am super confident on the mat top and bottom. Everything is coming together for me now.”

If Lovett and the other wrestlers Manning mentioned finish at the top or close to it, the team title would be within Nebraska’s grasp.

In the last couple of weeks, our guys are getting back into shape and are peaking now,” Schultz said. “To overtake the Penn States and Iowas, it just takes a few guys getting a few more bonus point wins in their matches. If everyone starts clicking at the same time and gets a few bonus-point wins and a few upsets, we have a shot.” 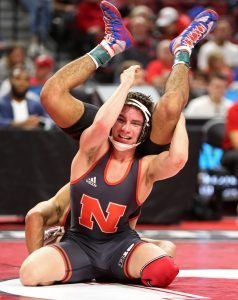 Who Let the Dogs Out

A Bounce-Back Effort Pushed NU Wrestlers Into Top Five Finish at Nationals By Nick Rubek And you thought your neighbors were noisy. Try living next