Allison Weidner isn’t one to shy away from a challenge. Weidner grew up on the family farm just seven miles outside of Humphrey, Nebraska, population 896. She played Class D-2 basketball, the state’s smallest high school classification. Needless to say the leap to Big Ten basketball had some wondering how the former St. Francis all-stater would fare.

Weidner put any doubts to rest during a stellar freshman campaign. She went from being a valuable role player off the bench to starter over the final weeks of the season for Nebraska. She helped lead the Huskers to a 24-9 record and an NCAA tournament berth. NU saw its season come to an end March 18 in a 68-55 loss to Gonzaga in a first-round tournament game in Louisville.

How was Weidner able to make the transition to power conference basketball so seamlessly? According to Bryan Reichmuth, her high school coach at St. Francis, it’s a constant determined mindset that Weidner has always shown.

“Nothing surprises me about Allison,” Reichmuth said. “I have always told everyone that if you don’t think Allison can do something, tell her she can’t. She will figure out a way. Obviously, it was a huge step up and no one knew exactly how she would adjust and fit in. What I knew for sure was she had the right recipe for success. Great personality. Great teammate. Hard worker; commitment to the game, student of the game.”

Weidner admits she was prepared for a rough go of things early on at NU. But with the help and mentoring of the older NU players, things weren’t as rocky as she expected.

“The transition went a lot smoother than I thought it would,” she said. “I thought maybe I’d have a rude awakening when I got here. Credit that to my teammates. They’ve kind of guided me and helped me along the way.

“The biggest thing is the level of competition. I went from a D-2 high school to playing against (Iowa All-American) Caitlin Clark. It’s been a lot of fun playing in the Big Ten.”

Her speed and athleticism on the court, even in the Big Ten, is noticeable. Being a multi-sport athlete through high school and her summers of playing club ball for Nebraska Attack also helped her adjust to the level of play. As did having her mom, Cathy, as her coach from fourth grade through middle school. “She was pretty hard on me,” Weidner said. “She probably made me the player I am today. And playing for Nebraska Attack allowed me to play against the best girls in the nation. It taught me I had to be better at defense.”

Weidner averaged 25 points per game her senior year, as the Flyers went undefeated and captured the D-2 state championship. She was a three-time state track champion in the Class D 400 and 800. She helped St. Francis win three state titles in volleyball, while earning first-team honors in 2020. She credits those various sports and learning the ropes of each to helping her elevate her game at the collegiate level.

“Playing three sports helped tremendously,” she said. “Not only from working the different muscles in your body, but also working your IQ. It’s a little different for every sport, but obviously it helps a lot in basketball.”

So did having a pair of older brothers. Brandon and Nathan, four and two years older than Allison, helped toughen little sis up during countless pickup games on the farm.

“It helped a lot having older brothers,” Weidner said. “It got pretty chippy, you know … throwing some elbows, bleeding a little bit, but they’ve been great at preparing me for all the contact.”

While her scoring ramped up in key games late, it was the little things, the intangibles, that stuck out to her old high school coach.
“The extra hustle plays even when it seems like you are out of the play. The dive to the floor for a loose ball. The sprint back on defense to get a deflection to save an easy bucket. These things are not noticed by the average fan, but I promise you are noticed by her coaches,” Reichmuth said. “Her ability to get into the paint and penetrate to the basket have been with her since she started for me as a freshman.”
When asked to pinpoint two areas of her game where she’s seen the most growth, Weidner didn’t hesitate. “Playing confident and being aggressive,” she said. “That’s two things that’ve been the best for me this year. I was a little laid back at the beginning of the year, and not so sure what I was going to do coming in. As I started to play more confidently, that’s been huge for me.”

“She just has that work ethic,” Williams said. “She’s competitive and she wants to win every sprint in practice. She wants to compete. She’s upset or frustrated when she makes a mistake. She wants to learn from that and get better. I think that’s helped her transition to the college game. And also she’s just received great coaching in the past.”

Weidner is living out her childhood dream of playing for her home state Division I university. It’s something she isn’t taking for granted, even as her role expanded.

“I’m definitely more comfortable just knowing my role. I think I’ve adjusted pretty well with it and it’s been a lot of fun.” Though the early NCAA exit was disappointing, there’s plenty of optimism moving forward for the Huskers.

The 24-9 record was Williams’ best mark since coming to NU from South Dakota in 2016.

Before turning the page on this season, Weidner gave credit to the three outgoing seniors for mentoring her and being tremendous teammates.
“All these seniors have been great to me,” Weidner said. “From Day 1, Micole (Cayton) took me under her wing, showed me the ropes, and got up on me on defense and showed me what Division I basketball was like.

“Sam (Haiby) … I’ve learned so much from her this season. And she continues to guide me and help me through this whole process. And Bella’s been awesome to me,” she said of Bella Cravens. “She’s a great post to play with. I can’t say enough about these three seniors.” 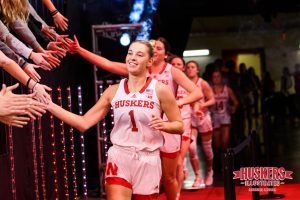 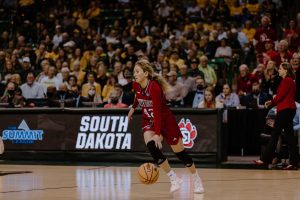 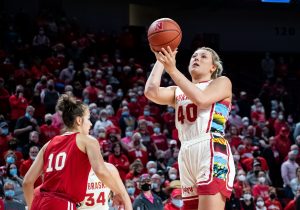 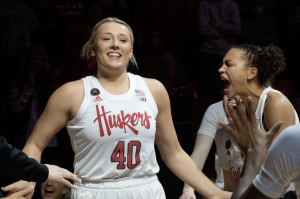