Madi Kubik and Kenzie Knuckles entered the Nebraska program together, and after this season, they will leave together.

Both Husker seniors said they would not be using their extra year, and this season at Nebraska will be their last.

Knuckles said it was a difficult decision because of the familial feel to the team, and she talked with NU coach John Cook multiple times about it, but the timing was right.

“It’s so hard saying goodbye to it,” Knuckles said Tuesday. “After four and a half years, I think that the time has come where me and Madi, we got here together, and we’re going to leave together. It’s just like passing the baton off.”

Kubik said she struggled with the decision but is thankful for the time she’s had with the Huskers.

“I’ve absolutely loved my career,” she said. “I’m really excited for our younger players to get the opportunity to be leaders in the program. To just encourage them and mentor them this season has been really great. I’m excited for the future.”

The future includes a bevy of top-ranked prospects. According to PrepVolleyball.com, Nebraska’s past three recruiting classes were ranked 1, 2, 1.

Kubik has been a constant presence in the lineup during her entire career. She’s played in every match and has been a six-rotation player since her first match. She was the VolleyballMag.com national freshman of the year and the top Big Ten freshman.

She was second-team all-Big Ten in 2019 and first-team in 2021. Last season, the 6-foot-3 outside hitter led Nebraska with 3.79 kills per set and was named a third-team All-American.

Knuckles played the first two years as the Huskers’ libero and earned all-Big Ten freshman honors. However, her role changed in the past two seasons as she gave way to All-American Lexi Rodriguez at libero. Knuckles switched to a defensive specialist but took on an attacking role from the back row.

She also emerged as a leader for the team and was elected captain for the past two seasons.

Three players have come back to Nebraska for a fifth year – Lexi Sun, Lauren Stivrins and Nicklin Hames, but each waited until after the season to make a decision. Knuckles said deciding before the season was over has helped her enjoy all the moments she has with her teammates and giving everything each match.

“Every game that I go into, or honestly every ball that I touch, there’s no point to regret anything,” she said. “I’m just gonna go out there and leave it all out there.”

Kubik, Knuckles along with Hames and Kaitlyn Hord will be honored Saturday night after the match with Minnesota for senior night.

Hord joined the Huskers this year as a transfer after playing four years at Penn State. Cook said has fit seamlessly with the team even though her time with them has been much shorter.

“She feels like she’s been here for four years,” Cook said. “She works really hard. She’s low maintenance. She does her thing and she’s fun to coach and fun to be around. She’s a great teammate.”

Cook praised the seniors for being a major part of their success during the last several years. Hames played in two national championship matches, while Kubik and Knuckles were an essential part of last year’s national runner-up team. However, he wants them to finish this year strong to earn some jewelry.

“They’ve been the face of the program for the last couple of years here, especially this year,” Cook said. “These guys need a ring, whether it’s a Big 10 ring or national championship ring – that’s the one thing that they’ve still on the table that they got to go after.” 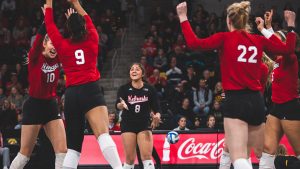 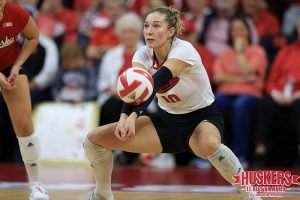 Huskers Face Iowa, Are Not Out Of The Hunt For A Big Ten Title

By Lincoln Arneal When the Nebraska volleyball schedule was unveiled five months ago, the last two weeks stood out as a make-or-break stretch that could

Read More »
November 17, 2022
We received your form submission!
A representative will get back in touch with you during business hours.