A return to a consistent training regimen has helped Darius Luff steadily climb Nebraska’s all-time charts in the 60-meter hurdles.

The junior from Lincoln High entered the Feb. 11 Tyson Invitational in Fayetteville, Arkansas, with one of the best times in the nation at 7.70 seconds. By the time the Huskers boarded the bus to return to Lincoln, Luff had jumped to No. 3 all-time with a career-best 7.67.

That time has Luff tied for No. 7 nationally with Jamar Marshall of Arizona State heading into the Big Ten Conference championship meet Feb. 24-26 in Geneva, Ohio.

Luff credited having a full off-season to train and prepare for the 2022 season after the tumultuous times that disrupted the 2021 indoor campaign.

“With COVID, we didn’t get much time to work out leading into indoor,” Luff said. “We kept getting shut down. We’d have two weeks off, then two weeks on. It was crazy. It’s hard to stay in shape and be able to run fast.

“This year we were working out in the summer, then we had a full fall season to train. That training set me up a lot better to run fast early in the season.”

Nebraska assistant coach Dusty Jonas has been working with Luff since he first joined the team after leading the Links to a Class A state championship and runner-up finish in his final two high school seasons. Jonas said the uninterrupted training is paying off just as he hoped it would.

“I’m not surprised he got out of the blocks so fast right away,” Jonas said. “There’s very little that that young man does that surprises me. He was progressing really well through the fall, and his consistency throughout the year was very good.

“Consistent training has been hard to come by in the age of the Corona virus. This season he’s put together some of the best workouts since he’s been here.”

Luff admitted he surprised himself by posting a personal best time in the first meet of the season, the Graduate Classic in Lincoln on Jan. 15.

“I guess I could say it was a surprise to me but normally I run that fast at the start of the season then get into things,” Luff said. “I’ve always expected it of myself. Ideally you’d want to have a PR (personal record) every week, but that’s just not realistic.”

Luff stayed in the 7.7s the rest of the month and admitted he was disappointed with his second place time of 7.82 at the Feb. 5 Frank Sevigne Husker Invitational.

The difference between those two races showed Luff the level of consistency he strives for is still a work in progress.

“I still have a lot of things I need to work on and get better at,” Luff said. “They were actually different things, something that I’ve struggled with all year. In some races (I get) a great start, then get a little off balance, float a hurdle or two hurdle and not get down as fast as I should.

“Then I won’t get a good start, but once I get over hurdle one, the rest of the race is good. In the prelims I had a good start then didn’t finish as well as I’d like. I didn’t like my start as much in the final. I need to put together a complete race.”

Luff’s father, Scotty, also was a hurdler at Lincoln High and helped introduce him to the sport. He began competing in the USA Track and Field summer program when he was 12. Competing for Peak Performance in Omaha and training in Lincoln, Luff eventually worked his way to national competitions when he was in eighth grade.

That summer success led Luff to what he said were the best times of his life helping Lincoln High win those two team trophies in his junior and senior seasons.

“Still to this day my experience with high school track was one of the best times in my life,” Luff said. “Just being a part of that team, winning (the state team title) my junior year and getting second my senior year, chasing the state championship as a whole team was special.”

Luff also said working with Jonas and new hurdles coach Brenton Emanuel is making the college experience a memorable one as well.

“Dusty’s been great,” Luff said. “He’s found a good way to keep me motivated. He likes to talk about the other guys I’m racing; he knows how to get me fired up. Knowing he’s been to the Olympics and knows what it takes to get to big meets has been good for me.”

Jonas said he also enjoys working with Luff, learning to push the right buttons at the right time and helping him develop the consistency needed to become one of the nation’s best and, maybe, even the best Nebraska’s ever had.

Jonas said Luff is well on his way.

“Being OK with being pretty good, if you want to be at the top, isn’t good enough. Keeping that edge is important, so you have to poke the bear a little bit,” Jonas said. “He’s got all the tools to be incredibly good. I’ll never say how good because you never know. Don’t want to put a limit on him. With him, the sky’s the limit.” 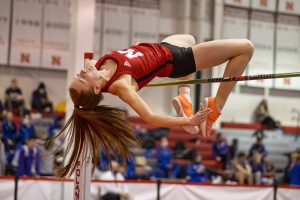 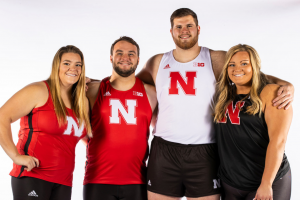