Before a late-season series at Illinois – and the long bus ride that preceded it – Husker baseball players gathered at Hawks Field, many with a rolling suitcase in one hand and a pillow in the other. A press conference with coach Will Bolt and three players was held prior to departure. The group dutifully answered all questions, but there was really only one that has been on everyone’s mind: What happened this season?

The answers have been clear – poor hitting, ill-timed errors and an inability to win close games – but solutions have been elusive the past few months as Nebraska went from an NCAA Tournament team in 2021 to one wondering if it will make the Big Ten Tournament in 2022. As Huskers Illustrated went to print, Nebraska was 20-29 overall and tied for ninth in the Big Ten at 8-13 with one conference series remaining. The top eight teams qualify for the league tournament.

The Huskers pushed No. 1 Arkansas to a regional final before being knocked out of last year’s NCAA tournament. Following the loss, Bolt talked about the importance of following up on a strong season.

“I think the future is certainly bright and the seniors and the upperclassmen have built a pretty solid foundation for what’s to come,” Bolt said.

That foundation is showing cracks 12 months later. Nebraska went from first to last in the Big Ten in batting average, and after being held to three or fewer runs 10 times a year ago, Nebraska has had 20 such games this season. Nebraska is also last in the league in slugging percentage and 10th in runs per game.

“We’ve been in a lot of close games,” Bolt said. “We’ve gotten off to good starts in games but haven’t finished it.”

For some coaches, that would be a throwaway line but it’s the truth. Prior to the season-ending series against Michigan State, Nebraska had played 26 games decided by one or two runs, winning eight.

Despite the offensive woes, Bolt first referenced defense as an explanation for why his team has come up just short so many times. Nebraska is ninth in the league in fielding percentage (it topped the conference in ’21), but Bolt said it’s not so much how many errors as when they’ve occurred.

“Other teams are making throws to throw us out at the plate and we’re making errors to extend innings,” Bolt said.

His words were prophetic a few days later in a 5-4 loss May 15 against Illinois. Colby Gomes’ grand slam gave the Huskers an early 4-0 lead, but Illinois scored in each of the last four innings to rally. The winning run crossed in the bottom of the ninth on an error.

Pitching has been strong despite a rash of injuries. Twenty pitchers have been used this year including nine starters. Last year, five Huskers started games with Cade Povich (15 starts), Chance Hroch (14), and Shay Schanaman (12) providing a consistent weekend rotation. Schanaman moved into the Friday slot this season after Povich and Hroch moved on, but after that it was often anyone’s guess as the Huskers entered several Big Ten series with the dreaded “TBA” appearing where a starting pitcher’s name should in school-issued press releases.

“That’s how our team was built – from the back of the bullpen to the front. We knew we had some depth. When you lose as many guys as we’ve lost it’s difficult to think that you could be competitive and we have done that because we have had some guys step up,” Bolt said. “Having that depth has allowed us to at least be competitive.”

The term “everyday lineup” has also been a misnomer as only Anderson and senior catcher Griffin Everitt have started every game; 15 Huskers had at least eight offensive starts. Anderson, the 2021 Big Ten Freshman of the Year, has put up a respectable .285 average this season, though that was a drop from last season’s .332. Freshman outfielder Garrett Anglim leads the team in hitting at .302 – the only Husker hitting above .300.

Things went wrong immediately this spring as Nebraska lost three of four to Sam Houston, then fell to 1-6 after being swept in three games at TCU. The Huskers were 4-9 before conference play started, a mark that included a series loss to Texas A&M-Corpus Christi. In conference, Nebraska won just one series prior to the season finale against Michigan State.

“This season hasn’t gone the way anyone wanted it to, or expected it to,” Everitt said, repeating words often said with slight variation this season.
Anderson, Bolt and others assured that it hasn’t been a lack of effort. So why did the season play out the way it did? Maybe that’s a question that can’t be answered.

“It’s definitely not (a lack of) talent,” Anderson said. “It’s so hard to tell in baseball.”

Could Carl Crawford Have Saved Frank Solich’s Job At Nebraska? 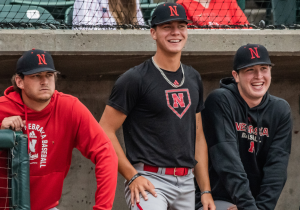 Bolt Has a Loaded Deck

Depth and starting pitching are on the Huskers side

Read More »
November 27, 2022
We received your form submission!
A representative will get back in touch with you during business hours.